I've said it before and I'll say it again. I'll keep saying it until I'm blue in the face or until something is finally done about it. We have been bamboozled!

Edward Solomon is an expert mathematician who has been analyzing the results of the election and has determined that they are literally impossible and cannot occur naturally.

Take a look at this video in which he explains how Georgia did it.

Solomon has been looking into the election results since November.

In this video you will see data from the NYT feed from PA on November 4th.

In this data, particular vote ratios are transferred between random sets of seized precincts throughout the day (see image link below): 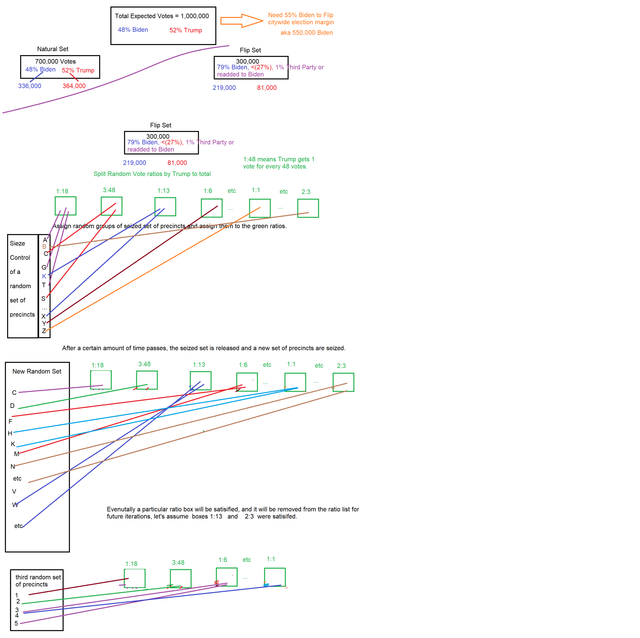 A total of nine exhibits are presented in this video, but there are in fact several hundred of these precincts seizures and ratio transfers on the day of November 4th alone, and the same ratios continue to be transferred for several more days within the overall data set spanning an entire week.

It then splices the Flip Set into multiple “ratio sets” and assigns them to precincts throughout the day.

Once a particular “ratio set” receives the votes it needed, it releases that set, and then Dominion injects it into the city wide count.

To hide it’s trail, Dominion reassigns the same “ratio set” to different (random) precincts throughout the day, so that the same precinct doesn’t keep getting the exact same ratio (or the same set of precincts).

During a particular period of time while a precinct is selected, it gives Trump an EXACT NUMBER of votes, it gives Biden a MINIMUM number of votes, and splits the small remainder to a third party or to Biden (via random assignment).

This explains why Jo Jorg got so many votes in every precinct (I’m a Libertarian and I know very few libertarians who voted for Jo this year, due to the importance of this monumental election).”

So here's my theory and here's why I think that officials keep saying that this was one of the most secure elections in the history of our country.

I think that it is likely the case that most people potentially acted rightly and did the things that they should. I don't think a lot of them would have been smart enough to do something like this. Plus, like Solomon said, someone couldn't do this on their own if they tried. It could only be done by an algorithm.

Sure there was still some funny business that happened and I think that was to make sure the algorithm was working properly or to adjust it, but most of it was done internally by the system. That's why the data needs a good analysis and to be brought to court.